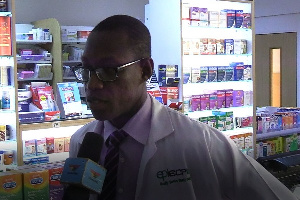 On February 14 each year, people climax their show of affection, commitment and appreciation to their loved ones with the exchange of gifts among others, all in the name of Valentine’s Day.

Contemporary era, however, has translated the day as synonymous to sexual affairs, lovemaking and other themes related to sex.

For this reason, both government and non-governmental agencies have over the years advocated for the safe commemoration of Valentine’s Day by propagating the gospel safe sexual practices.

However, shortage of condoms and other sexual enhancers, as well as, contraceptives have been recorded in pharmacies, clubs and hotels in previous years.

But this year, the sale of such products according to some pharmacists is picking up rather slowly as compared to previous years.

GhanaWeb’s checks at some pharmacies and traditional market centres in Accra revealed a slower pace in the purchases and sale of condoms, contraceptives and sexual boosters.

A pharmacist at Bedita Pharmaceuticals told the news team that people are gradually shifting from the purchase of condoms to the post-pill contraceptives.

In her words, “…It’s just like any other day, I can’t feel it anymore…Vida post-pill, the morning after pill, that one the purchase is high as compared to the others. Here we sell a lot of condoms in a day so I don’t really see the difference…”

At East Cantonments Pharmacy, a pharmacist Johnson Osei, whose submission didn’t vary vastly from the above, there is a gradual reduction in the sale of condoms prior to Valentine’s Day.

He said, “Generally we tend to see a spike in the sale of emergency contraceptives mostly during Val’s Day and the period leading to Val’s Day. I think most people prefer to rather take emergency pills instead of using condoms which is not the best practice.”

However, some pharmacists who spoke to the team off record indicated that, even though there is a surge in consumerism, most of the purchases are directed at gift hampers and other items. Adding that most people prefer to purchase their sex protections in the evenings.

Meanwhile, herbal medicine sellers, who also sell condoms and sexual enhancers and others also lamented the slow pace of their sales this Valentines, but they refused to speak on record for fear of possible clampdown by the FDA.

In January 2007, Valentine’s Day in Ghana was announced as Ghana’s National Chocolate Day by the then Tourism and Diasporan Relations Minister, Jake Obetsebi-Lamptey but that initiative didn’t do much with regards to the day being synonymous to “Love day”.

It was supposed to be the trip of a lifetime, but Grace Millane’s backpacking holiday had barely begun when her

‘They are all American but I don’t care’: Tyson Fury has no objection to a full team of US judges