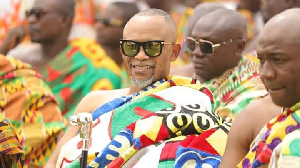 play videoFadda Dickson is Managing Director of Despite Group

It was more like an exhibition of fleet of cars as family, friends and associates of Dr. Osei Kwame Despite thronged Trassaco Valley in style on Thursday, for the marriage ceremony of Kennedy Osei Asante, son of the business mogul.

One of the attendees who stood out with his brand of car was Fadda Dickson, Managing Director of Despite Group who has been described by many as a pivot that possesses proficiency in media marketing strategies.

He was spotted heading to the event in a posh McLaren sports car valued at about $325,000!

Dr. Osei Kwame Despite, owner of Despite Media, and his brother Dr. Ofori Sarpong were spotted at the event in a blue wrangler jeep. Both were clad in colourful kente clothes with beautiful traditional slippers – ahenema – to match.

The groom who is the General Manager of Despite Media was also clad in a nice kente clothe and flanked by about 60 groomsmen in brown kaftan.

On February 12, 2020, Kennedy Osei Asante proposed to his girlfriend Tracy, on a flight while returning from a friend’s wedding at Calabar in Nigeria.

“Hello everybody on this flight … the bible says when a man finds a wife he finds a good thing. At this moment I’d love to ask Tracy to formally grant me the opportunity to make her my wife,” he said after he was given access to the flight mic.

As part of activities marking the 2020 Population and Housing Census, the Dormaa East District Assembly in the Bono Region

The Premier League is back at it after some notable midweek European action. Here’s what to look out for: JUMP