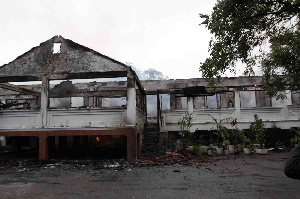 The fire started in the early hours of Sunday, February 14,2010

On Valentine’s day, a fire outbreak was recorded at the Ridge residence of Ghana’s former president, Jerry John Rawlings, in the year 2010. The fire started in the early hours of a rainy Sunday morning.

According to reports, the colonial-style bungalow which was partly made up of wood was completely burnt down at about 9:30 am.

A number of government officials including Nana Akufo-Addo sympathized with the Rawlings’ family.

“My wife, Rebecca, our children and I join many other Ghanaians to extend to you, the former First Lady and your children our sincere sympathies over the fire that devastated your home and belongings in the early hours of today, February 14, 2010. We are however grateful to the Almighty that there were no serious injuries to persons. Our prayer is that the Good Lord will continue to protect you and your family,” Nana Akufo wrote in a statement dated February 14, 2010.

Read the full story originally published on February 14, 2010, on Ghanaweb

The cause of the fire, which started at dawn, is yet to be known. However, the damage is said to be extensive. Former President Rawlings was not at home when the fire started but he has since arrived in the house.

Only his wife and one of their daughters were at home and there is no report of casualties, according to initial reports. Smoke is still billowing from the ruins of the residence at 0900.

The Ghana National Fire Service (GNFS) officers and security personnel are at the residence. Many government officials, senior officials and foot soldiers of the National Democratic Congress have come to the residence to sympathize with the Rawlings’.

The former first couple has lived in the house, an old colonial bungalow, since the early 1980s. The GNFS and security officials are scheduled to hold a press conference later.

‘That ambition is always there with England. I would very much like to be part of the Euros’: Chris Smalling